Still-parked RVs and the Liminal Space 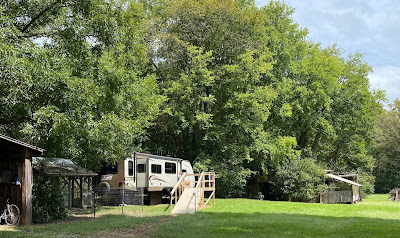 My friend Susan asked me the other day, "What's it like having Bill's RV still sitting in the backyard?"

It was a good question, and it's made me think.

If it weren't for some IRS challenges that linger after his passing, we might have sold it by now. But we aren't able to at the moment, and so there its 28-foot bulk sits along the left side of our backyard between the henhouse and the barn.

It's almost completely empty. Dark and silent except for the tiny green glow of the microwave clock inside. Grasses are slowly creeping across the mulch path I raked and rebuilt month after month while he lived here. The propane tanks are just as full or empty as they were when he died on June 1. And aside from our cat Oscar, who loves to lay on the wooden ramp when it warms from the sun, none of the other animals run up to the RV door anymore, understanding by now that there's no Uncle Bill inside with joyful greetings and treats in-hand.

Susan's question has me present to the presence of his living space in a more active way now, and there's no easy answer to "what's it like".

On one hand, seeing it every day is somewhere in the realm of excruciating. It's a big, giant 3D reminder that he's GONE, a thought which, when I look directly at the RV's black, dead windows, still occurs in my body as a physical hit to my solar plexus and stomach, sometimes accompanied by shallow breathing and blurry eyes, sometimes not.

After more than 3.5 months, my brain still can't quite comprehend that he's physically, literally gone from this life. A little fantasy corner of my mind wants to believe that he's simply out of town or has moved to another city for a new job, not that he's gone forever. (Another part of my brain wants to chime in here, "But he's always with you in your heart! It's okay! It's all fine!" I appreciate the internal consolation effort, and part of me knows that to be true. And, it also feels like a consolation prize, so I'm not totally buying it at this point.)

On the other hand, that big ole' RV (travel trailer, as Robert reminds me) also represents a giant, life changing leap that all three of us took--Bill, Robert and I--into togetherness, commitment, and love...into the unknown, together. I look out to that long, rectangular box of metal and materials and in an instant feel three years' worth of partnership, time spent, and his happiness and sense of security in the little home that kept him sheltered and safe, with us across the yard and Nugget joyfully living her best life EVER every day with her whole pack nearby and with room to run.

I see the crises and the sprints from the house out to him. I see the EMTs rolling a stretcher up the godsend of a ramp our friend Josh built after the steps he'd first built became a hazard.

I can still step into the experience of knocking, hearing "YyyO!" from inside, and opening the door to smell the meals Bill proudly made for himself out there. And I see him moving around his little kitchen in the process, TV screen turned so he could see it, some documentary playing that he couldn't wait to tell me or us about.

I see our 10-year-old little dog, Poppy, who would turn into a puppy version of herself whenever she went in there, prancing and dancing around so happily with Bill and ultimately sitting at full attention, tail wagging hard, ears up, next to the treat cupboard, waiting for him to spoil her rotten. I see his big smile and compassionate heart on the rare occasions our old girl Lucie, who we lost on June 18, would stumble her way out to his door successfully for some love, extra rump scratches, and a treat.

I see our beloved sister Liz in there with him trip after trip that she made to our home, hours spent poring through boxes, drawers and tchotchkes. I can see her patiently listening to story after story about each and every item they touched, letting his being heard and laughing and talking together take priority over the intended productivity of decluttering his tiny home.

Why would I want the physical representation of all that removed in a flash?

The more I think about it, the urge to "get rid of it" seems akin to our western culture's lack of facility with death. Being willing to let the experience of his death roll through me like waves on a beach, grief moving through in its own natural time, seems like the right thing, even though it's hard and hard and hard. Not clinging to grief, but letting that big side-yard reminder of our loss heal me a tiny bit each day, with every glance and re-captured breath. With every tear and every step past it on the way to the barn.

Every time I experience "the hit" and subsequent recovery, I can feel my "be with everything" muscle flexing just the tiniest bit. It's not the Crossfit of grief experiences, but it's something.

And what is life, if it's not about learning to be with everything?

I had a great therapist in my mid-20s--my first therapist, in fact--who taught me about the idea of "liminal space"...the often-uncomfortable space between where we've been and where we're going. It's most keenly felt in times of transition, naturally, and our human instinct is to bolt through...to leap from one "known" to the next "known." But slowing down through the liminal space offers so much...pain, sure, but also the opportunity for depth, due diligence, exploration, curiosity, creativity, possibility, new thoughts, growth, and, ultimately, peace with what we may have thought we couldn't live or get through.

Bill's home on wheels, tucked onto our property for the forseeable future, keeps me present to my process, to our life and love and family, to what we did and who we were for one another, and to this remarkable, remarkable journey called Life.

So, "what's it like"? I still don't have a short answer, but it is precious and sacred. A connection, and a catalyst. And I can be with that for a while more.

Popular posts from this blog

Bill's Gratitude List and How It Came to Be

Bill in one of his favorite tee shirts, happy to be in India. 2017-ish. Bill's last stay at the hospital was a rough one, but thanks to a good friend, it had its highlights and left us a treasure. He'd landed in what he called "the Ritz Carlton with drugs" just a few weeks before his passing due to extreme nausea and unrelenting dizzingness. (Both his Hospice nurses and doctors strongly believe the cancer had finally taken hold in his brain, and these symptoms supported that suspicion.)  While he generally loathed and feared the hospital during his three years with cancer--I think because he was afraid he would die there, and he did not want that--this time was particularly hard.  He'd gone into the care of Hospice just 24 hours before we had to call 911 this last time, and the difference in his hospital experience was dramatic. No nurses coming in continually to check his vitals, no transport people showing up at all hours to whisk him away for another scan or te
Read more

My Juvie and Prison life.

Little known fact. I've been in more prisons than anybody I know. Never to jail though... to speak of. And it's true... unless some of you folks haven't been entirely honest. Now that I'm thinking about it, it's not just prisons. "State Hospitals" too! Made my Mama proud. I wrote part of this story on a web site called Quora. Quora is a social media site where people pose questions to an expectant group of other people who chime in with thoughtful replies. Usually, the folks doing the replying have some degree of credibility. You can't just make shit up. Well, you can. But you don't last long. Off with your head. Anyhow, The site has gone through big changes over the past couple years. Not good changes in my opinion. Now Quora pays people to ask dumb questions. And then troll other people for thoughtful replies. It's brilliant. All this to say... Here's what I wrote. And after, what I didn't write. What’s it like to visit a prison? Bill
Read more

This blog is a sibling-team work in progress. It was started by Bill Payne in 2019, a year or so after he was diagnosed with stage 4, terminal lung cancer. After almost three years in treatment and living with cancer, Bill passed away on June 1, 2021. Now, his younger sister, Laura, is taking on fleshing out some of the drafts he left unpublished and also adding her own writing to this space, trying to capture their remarkable partnership in his cancer--and life--journey together.